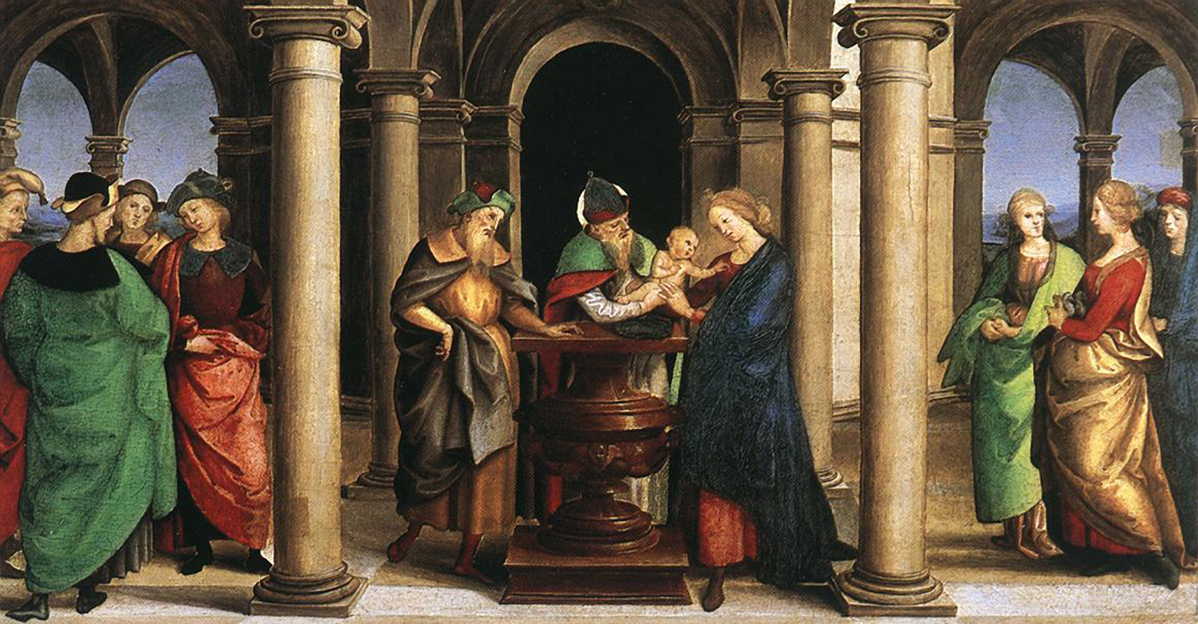 Presentation in the Temple by Raphael

Candlemas is the common name for a Christian holy day that commemorates the Presentation of Jesus at the Temple and the purification of the Virgin Mary. [1] At the time of Jesus’ birth, Jewish tradition dictated that on the fortieth day after giving birth a woman would go to the temple to present her child to the Lord. [2] Forty days from Christmas day brings us to February 2nd, the day on which Christians celebrate the occasion of the Holy Family’s visit to the temple in Jerusalem for the presentation of the Christ Child. [3]

This is the message we have heard from him and proclaim to you, that God is light and in him there is no darkness at all.—1 John 1:5

There is no consensus among historians regarding the exact origins of this feast day, though there are a few theories. It’s possible that the Roman Catholic Church instituted the celebration of Candlemas sometime between the fourth and sixth centuries; others believe that Candlemas is the result of the Church’s efforts to Christianize various pagan celebrations that took place during the month of February. [4] Regardless of its murky origins, one can imagine why the first public presentation of Jesus Christ, who is called The Light of the World, might come to be associated with the lighting of candles. [5]

In earlier times, Candlemas was seen as the official end of the Christmas season, which lasted much longer than it does today. Even as recently as the late nineteenth century it was common not to remove the Christmas greenery until Candlemas, at which time it was traditionally burned in the family fireplace. [6]

Other Candlemas traditions naturally arose over the centuries, perhaps the most well-known being the “blessing of the candles.”  We can take a closer look at this tradition by becoming acquainted with a branch from my very own family tree.  My mother’s family traces its roots to the French colony of Acadie, located in Atlantic Canada and comprising such places as New Brunswick, Prince Edward Island, and Nova Scotia. [7] In fact, my maternal line (my mother’s mother’s mother . . . etc) recedes back through time to a woman named Catherine LeJeune who lived in Port Royal, Acadie (now Annapolis, Nova Scotia) in the seventeenth century. [8]

Like her fellow Acadians, my ancestor Catherine LeJeune was a Roman Catholic from France and she would, no doubt, have been quite familiar with Candlemas. Historical documents show that the annual blessing of the candles in Acadie, during which time families would bring their year’s supply of candles to be blessed by their parish priest, goes back several hundred years. For example, in 1693 Joseph Robineau de Villebon, a commanding officer in the Acadian colony, delivered sixty candles to Beaubassin (in Nova Scotia) on behalf of the inhabits of the parish to be blessed by their priest on Candlemas morning. [9]

In Acadie, the blessed candles were used for many purposes throughout the year: To protect the house, to use when the priest came to a home to bring communion to the sick, or to burn while the family kept vigil over the body of a loved one who had died. Some midwives would light a blessed candle during a difficult birth, and Acadian fishermen sometimes kept a blessed candle on their boat to light during stormy weather. [10] The blessing of the candles was preserved in Acadian parishes until very recently. [11]

Another Acadian tradition that took place on Candlemas was the door-to-door collection of food to be used for a community meal later in the day. Anyone with a large enough house could host the party. This activity was not only entertaining for all involved, but it was also an act of charity—any food that was left over after the party was given to the poor. In some villages the collection of food was done almost exclusively for the purpose of providing for the sick, the widows, and the poor. [12]

Nous sommes les gens de la Chand’leur
Allez-vous nous donner d’la fleur?
(We are the Candlemas people,
Are you going to give us any flour?)—from Arsenault’s “Acadian Traditions on Candlemas Day”

I invite you to celebrate Candlemas on February 2nd—perhaps with a candle-making activity.  I also encourage you to make a donation to your local food shelf, in the spirit of the Acadian Candlemas collections of long ago.

You might also enjoy this traditional Acadian recipe, traditionally eaten on Candlemas day.

Directions:
1. Heat a griddle or large pan on medium heat.
2. Mix all the ingredients together to make a smooth dough (it will be very liquid, not fluffy like regular pancakes).
3. Grease the griddle or pan with butter. Drop tablespoons of batter onto the griddle and fry on medium heat until edges are cooked and bubbles form on top.
4. Flip over and fry until golden brown. Serve with molasses or grated maple sugar.